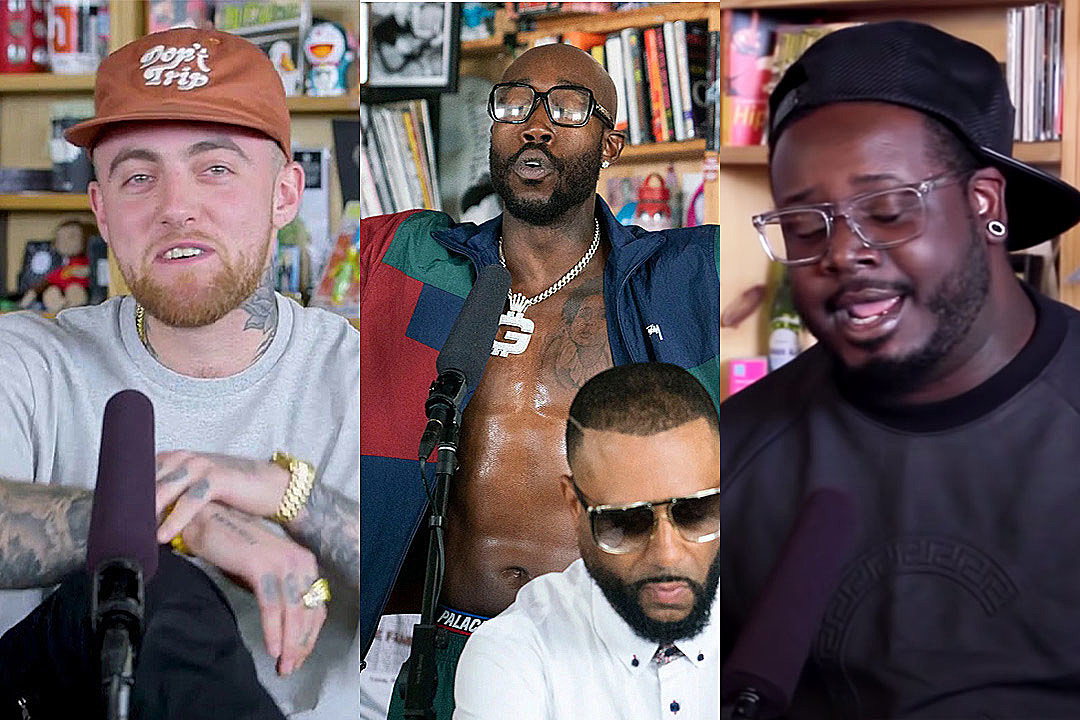 NPR Music’s Tiny Desk series has been providing performance gems for over a decade now. Since the platform sparked off its intimate performances at a desk inside the media organization in Washington, D.C., plenty of major league and minor league hip-hop faces have graced the stage—or office corner in this case. Each generation of talent, from the Wu-Tang Clan to Roddy Ricch, have performed roughly 20-minute live shows that pull in the viewer as if there was a seat right in front of the artist.

For rappers who typically use heavy instrumentation and thorough musicality in their songs, playing with a live band can create a magical experience. For Anderson .Paak, having real instruments coat the backdrop for his soulful voice to belt over is an experience that’s far too familiar. So obviously, he bodied his 2016 Tiny Desk performance with The Free Nationals, playing tracks “Come Down,” “Heart Don’t Stand A Chance,” “Put Me Thru” and “Suede.”

Another notable example is Mac Miller’s 2018 performance, which captures his transmissible charisma and further epitomizes that he grew into an actual artist, not just a rapper. The overall production is presented in a way that made it impossible not to feel each and every note he let out. He performed “Small Worlds,” “What’s the Use?” featuring Thundercat and “2009.”

Smoothness aside, Freddie Gibbs and producer Madlib brought a more rugged feel to the entire thing in 2019. But that doesn’t take away from how divine their Tiny Desk show sounds. During their performance, the duo served up even more evidence that as a rapper-producer combo, they don’t miss. “Education,” “Gat Damn,” “Soul Right” and “Freestyle S**t” were all part of the set list.

Sometimes, the spotlight is taken off of vocals, too. And though they can be hugely effective, that doesn’t just go for solos. Take for example producer Zaytoven. In addition to his solid showcase with Gucci Mane, Zay’s solo performance in 2019 had the passion of a Sunday church service in the South. You know, the ones where everyone has a paper fan that they’re waving at their face to cool off. Future was supposed to appear for this Tiny Desk event, but since he was a no-show, Zaytoven, with a band backing him, performed instrumental versions of some songs he produced for the rapper like “Mo Reala” and “Peacoat.”

Then there’s one of the most classic Tiny Desk performances in NPR Music history: T-Pain. In 2014, the Florida rapper went viral for this performance because people were shocked that he could sing with no Auto-Tune. While T-Pain has made a career off using the voice-altering technology, he’s got plenty of singing skills without it. Get into his versions of “Buy U A Drank (Shawty Snappin’),” “Up Down (Do This All Day)” and “Drankin’ Patna” without the tune.

Though there were dozens to go sift through, XXL watched and highlighted 25 of the best of NPR Music’s Tiny Desk performances of the last 10 years. Plus, we rank them all. Tap in below.